Sudanese and Senegalese mercenary troops have arrived on the Yemeni Island of Socotra, media sources reported on Thursday evening.

The sources confirmed the arrival of the first batch of 600 mercenary soldiers from the two countries to Socotra province.

The UAE had earlier asked its militias of thd Southern Transitional Council on the island to return back to Aden, which means that their service to the occupation of the island has ended.

Earlier in the day, an Emirati ship arrived to the port of Island, carrying an unknown and suspicious cargo, a local source reported.

The source suggested that the shipment may be telecommunications and espionage equipment meant to complete the construction of military and intelligence bases. 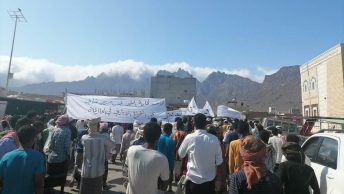 Hundreds of protesters rally against UAE occupation in Socotra