People in Vancouver protest war and bombing on Yemen

The protest in Vancouver, Canada, joins other actions around the world to show solidarity with the Yemeni people and demanding an end to the Saudi-led war against Yemen.

The protesters denounced the continued sale of weapons to these criminal and brutal states (Saudi Arabia and UAE) by the U.S., Canada, Germany, France, Italy and other countries.

The event began with the gathering of dozens of members of the Yemeni community and Canadian activists raising Yemeni flags in their cars with posters and slogans calling for an end to the war on Yemen. They called on the Canadian Prime Minister Justin Trudeau and U.S. President Joe Biden to stop all arms deals with Saudi Arabia and the United Arab Emirates.

Asaad Abu Haidar al-Jababi, a political activist, said in a speech that the protest came to mark the six years of injustice, killing and destruction on Yemen by Saudi Arabia led coalition.
“Today we are sending message to Saudi Arabia and the coalition countries to stop their daily attacks and criminal bombing on Yemen immediately. We demand that airports and ports open without any restrictions and in normal function. We are for a peaceful negotiation and stop the starving of children, women and the elderly in Yemen,” he explained.

“Our second message to the Canadian government, The United States and European countries, which is to stop the arm sales to Saudi Arabia and respect the charters of the United Nations and the humanitarian principles, as well as respecting the right of the Yemeni people to determine their future without interference by U.S., Canada, and Saudi Arabia led coalition, “He added. 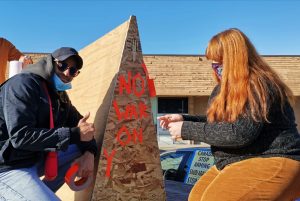 Tamara Hansen, an organizer with MAWO said that March 25 marks the beginning of the seventh years of slayings of Yemeni people. It is unacceptable and must be stopped immediately.

“We continue to support the Yemeni cause and people, living amidst the worst humanitarian crisis caused by Saudi Arabia and the coalition countries,” she added.

“Here in Canada, we have the moral responsibility to raise our voice to the government to act. We are against the war on Yemen and continue to demand a stop of selling weapons to Saudi Arabia, and therefore we demand an end to the war on Yemen. We’re for a sovereign and independent Yemen,” she said.

The car caravan then drove out in a very visible and noticeable convoy that roamed Vancouver’s busy streets for long hours delivering, messages to the Canadian people.