The Al-Qaeda terrorist organization has claimed responsibility for the recent bloody attacks on the Emirati-funded militias in Abyan province, southern Yemen.

This came less than 24 hours after the UAE-backed Southern transitional Council (STC) militia announced their complete seizure of Abyan from Al-Qaeda.

The terrorist organization denied what was circulated on the STC media outlets regarding their control via the “Third Giants Brigade” over Al-Mahfad and Mudiyah districts in the same province.

Al-Qaeda confirmed that the STC militias were targeted with explosive devices yesterday in the districts of Mudiyah and Al-Mahfad, which resulted in the death and injury of many STC militants.

On the other hand, the STC media admitted to the death of 4 of its recruits and the wounding of 43 others in an attack on an STC military vehicle with two explosive devices, at the entrance to the most prominent strongholds of the STC militias in Wadi Omaran, Mudiyah district.

Earlier, the STC media outlets had claimed they had taken control of all the province’s districts after the tribes allowed a limited spread of it in Al-Mahfad district, according to an agreement not to pursue or harass the organization’s elements deployed there. 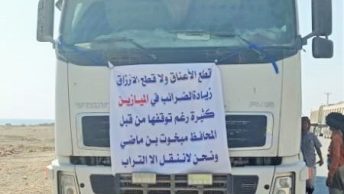